My studio is tidy! 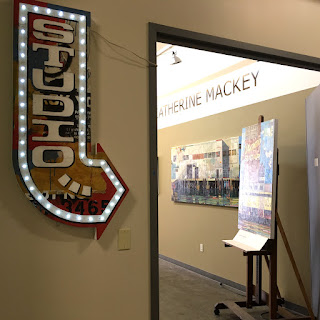 There are 100 other artists also showing in the building so allow yourself plenty of time to enjoy all of the fantastic art.

Sorry about the short notice!

More information on artists showing at 1890 and in the neighborhood.
Posted by Catherine Mackey at 7:40 PM No comments:

The difficulties of escaping a creative pigeonhole while still keeping the lights on. 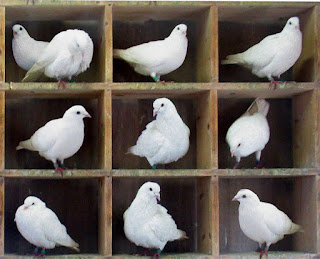 A hole or small recess for pigeons to nest;
A small open compartment for keeping letters or documents
A neat category which usually fails to reflect actual complexities

Common failings of pigeonholing schemes include:

Entities may be suited to more than one category. Example: rhubarb is both “poisonous” and “edible”.
Entities may change over time, so they no longer fit the category in which they have been placed. Example: certain species of fish may change from male to female during their life. 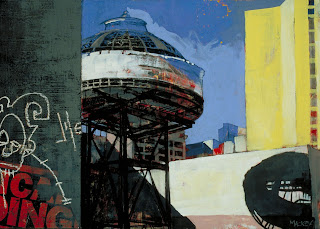 As you all probably know – I paint architecture and the urban environment. I started to paint twenty years ago and, as I developed my skills and gained a following, I was painting demolition sites, buildings, walls, doorways, graffiti and signage. I was earning money, but not enough to support myself.

Then, ten years ago, I needed to become self-sufficient very quickly. I considered getting a job, an idea that lasted for a few minutes until stubbornness/pigheadedness – call it what you will – kicked in and wouldn’t allow me to let go of this “painting thing”. So my art had to pay my bills and keep my lights on.

Previously a couple of paintings of San Francisco piers had sold quickly so I did some more. They sold. I did some more. They sold too. Piers became the predominant subject matter of my total creative output, my vendors “encouraging” me to do more because they sold easily. At some point that encouragement turned into a resistance to other types of work, mostly delivered with discreet hints but sometimes with clear requests. I found that by creating a demand for pier paintings I had reduced my vendor’s willingness to show other work. They too have bills to pay and the desire for the easy sell is understandable. I love painting piers but I started to feel constrained by their popularity. The creative urge to explore new things is hard to ignore and I believe that a pigeonhole, or formula, sounds the death knell for an artist’s development.  The idea that I divide my time between piers and other work sounds sensible, but my creative process is labor-intensive and slow, whatever the subject matter, and a large painting can take up to a month to complete. Those lights cost money! When I did the math I thought that the only way I could afford to do both would be if I decided to forego sleep and any kind of personal life! That is…until I could find buyers for my “other” work.

The story has started to improve: In the past couple of years I risked spending some time away from money-earning piers to work on a series of architectural interiors. I also completed a collection of paintings depicting old sinks at Alcatraz. And there were sales! Not through the galleries or dealers who represent me but to the San Francisco art-loving public who came to my work space during two Open Studio events.

Heartened by this I allowed myself total “studio playtime” during December and January to explore the interaction between paint and collage. While many of my friends were spending the holidays overseas I was in my studio cutting up old street posters – and having a ball!

Now the really good news: I submitted this new work to Artspan for their annual Selections Gala and exhibition. I was one of the ten artists selected and two of the three pieces accepted were the result of my holiday playtime. This has given my creative morale an enormous boost! I now have the confidence that, financially, I can afford to spend more of my time exploring. 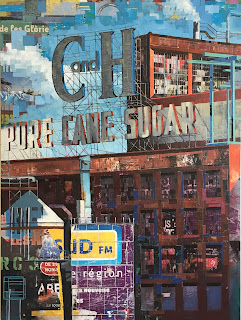 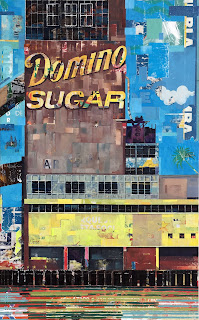 In the meantime I am working on two large pier paintings in my studio. My lights are still on!

Posted by Catherine Mackey at 10:27 PM No comments: 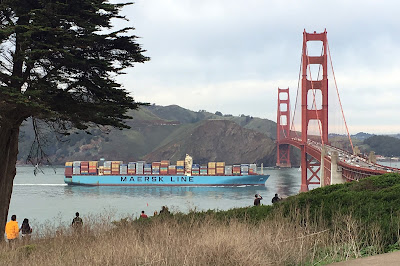 This powerful and thought-provoking installation is presented at Fort Winfield Scott in the Presidio of San Francisco.

Curated by Cheryl Haines of FOR-SITE Foundation, the show brings together 18 contemporary artists from all over the world whose work explores the themes of identity, fear, exclusion, surveillance, and displacement in our unstable world. The military setting overlooking the Pacific Ocean and the Golden Gate Bridge adds to the impact of the art, its messages and questions.

Every single piece of art I saw was visually and conceptually arresting. One frightened me, and another reduced me to tears. But because I love drawing my blog pick for today is: Concourse by Tirtzah Bassel. 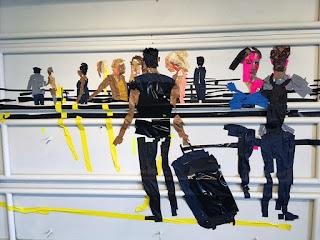 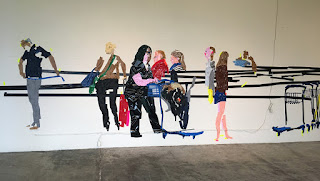 Bassel draws directly onto the walls, over pipes and windows, with duct tape. The gestural marks, staccato application, and limited palette conveyed the anxiety and confusion of going through the security area at an airport. It was the most wonderful drawing I’ve ever been in! 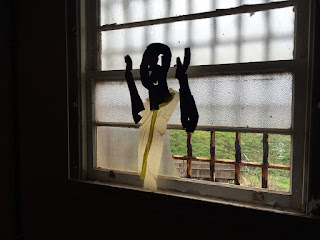 Posted by Catherine Mackey at 10:14 PM No comments:

Posted by Catherine Mackey at 5:54 PM No comments:

If you have been following my blog over the past few years thank you for your time and interest. I will soon be transitioning to a blog which is built into my new website. I hope you will continue to follow my musings and announcements there by filling in the sign-up form.

Posted by Catherine Mackey at 5:54 PM No comments:

I recently visited the Belvedere in Vienna to see works by Klimt and other Austrian painters.
Upon entering the formal gardens I was faced with a collection of strange bronze animal-head sculptures around a traditional ornamental pond in which floated an enormous lily-pad made of life jackets. Something was up! The frisson between the refined architectural backdrop and the brutality of the life-jackets was exciting. Ai Weiwei was in town and his installation, "Translocation - Transformation" was occupying several spaces in and around the main buildings. My expectations of a calm morning were quickly adjusted. 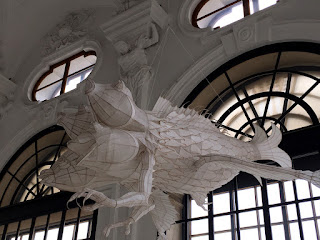 I was particularly entranced by the three mythical creatures suspended above the staircase of the Upper Belvedere. Hand-made in the fashion of kites, with white silk stretched over a fine bamboo framework, these beings seemed to fade in and out of visibility against the white marble background and, depending upon your vantage point, sometimes interacted with the architectural details of the space. 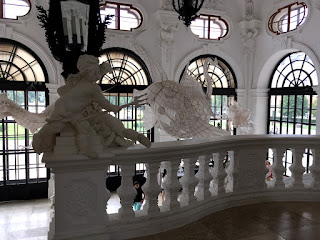 After the excitement of these unexpected floating sculptures I headed to the galleries and spent a couple of hours in quiet contemplation of paintings by Klimt, Munch, Schiele and others. I then entered a small room containing a circle of "character heads" by the 18th century sculptor Franz Xaver Messerschmidt. The discovery of these seriously contorted faces by an artist previously unknown to me was as exciting as the life-jacket-lily-pad in the pond outside!  I was told by a very stern gallery attendant that I could not take photos so I tried to capture some of the expressions in my sketchbook.
These drawings were done with colored pencil over yellow ink.

Posted by Catherine Mackey at 10:48 PM No comments: 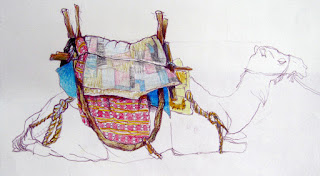 It’s been quite a while since I’ve posted. As more and more time has passed I have become increasingly intimidated by the unspoken expectation of important thoughts and witty delivery. So the time has come to pose an important question with which I have been much occupied:

Why is it harder to draw horses than camels?

I recently went to the Sierras for a couple of days to watch the Tevis event – a horse and rider endurance race over a hundred miles of mountain trails between Squaw Valley and Auburn CA. I was surrounded by horses and I had taken my sketch book so was expecting great things. Wow, was I disappointed! Most of my attempts at catching a likeness of these beautiful animals were so bad I will not post them. 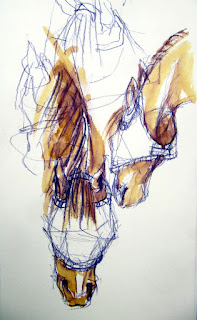 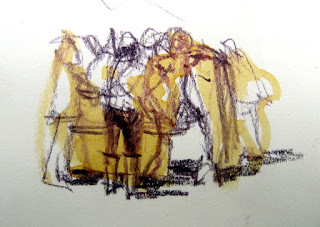 Yet…. when in Morocco two years ago I came face to face with camels – literally – and really enjoyed sketching them. And, if I may say so, I don’t think the results are too bad.

So the horse, a beautiful animal common in our culture, is much more difficult for me to draw than the camel, a strange-looking creature not usually seen on the West Coast of the US. 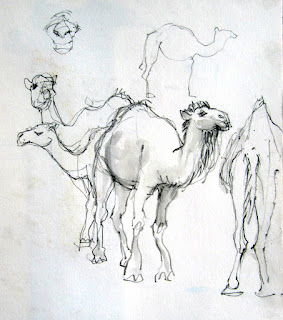 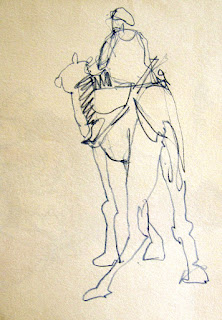 I consulted with a fellow artist who grew up on a horse ranch and rode Arabians daily and she confirmed that she too finds horses difficult to draw.

So perhaps odd things are easier to draw? (I do quite a bit of figure drawing and I admit to struggling with beautiful models.) Do we pay more attention to seeing those things with which we are not familiar? Does the beauty of a horse lie in subtle proportions much harder to capture than the camel’s bumpy pre-historic weirdness?

Of one thing I am certain – I could never draw a kitten!
Posted by Catherine Mackey at 6:31 PM 1 comment:

Catherine Mackey
I'm a fine artist who specializes in painting urban environments including everything from abandoned buildings and old piers, to warehouses, bicycles and bubblegum machines. My studio is located in San Francisco, CA.